Kindergarten is supposed to be all about letters and numbers and shapes and story time and dress up…unless, you are diagnosed with acute lymphoblastic leukemia, a couple of months before kindergarten begins.

Ellie arrived at Woodburn Elementary in 2013, with her winning smile, ready for her first day of kindergarten. Sadly, by that time the cancer treatments had caused most of her hair to fall out.  She was a resourceful kind of girl, so she found a couple of fun and cheery hats, and she made that, her “look”.

Her teacher, Jay Coakley was inspired.  He held a hat drive to provide Ellie with more hat choices.  He used the power of social media to spread the word, and soon, hats were pouring in from across the country.  Since 2013, Ellie’s Hats has provided hats to thousands of kids with cancer.

In July 2015, Ellie finished her treatments.  As her hair began to grow back, she wanted a stylish haircut.  A visit to Cartoon Cuts was just what the doctor ordered!  Ellie has become a frequent Cartoon Cuts visitor, and she stopped in last week to get a haircut and a photo with her friend, “Ellie, the Elephant.”

“Hearing her story was so inspiring, and we wanted to help Ellie help others,” said Kathleen Perkal, Founder of Cartoon Cuts. “We are partnering with Ellie’s Hats to raise funds to support families battling childhood cancer.”

Throughout the month of February, customers will have the opportunity to “buy” a paper hat for $1.00 for their children to color and hang in the salons.  The proceeds will be donated to Ellie’s Hats to provide assistance for families battling childhood cancer.

Ellie’s former teacher, Coakley is the Founder of Ellie’s Hats.  He is “so excited to partner with Cartoon Cuts to bring joy to families during such a difficult time.” 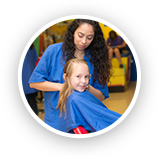 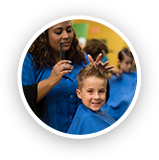